Mônica Valente: “The fight is for Lula and democracy” 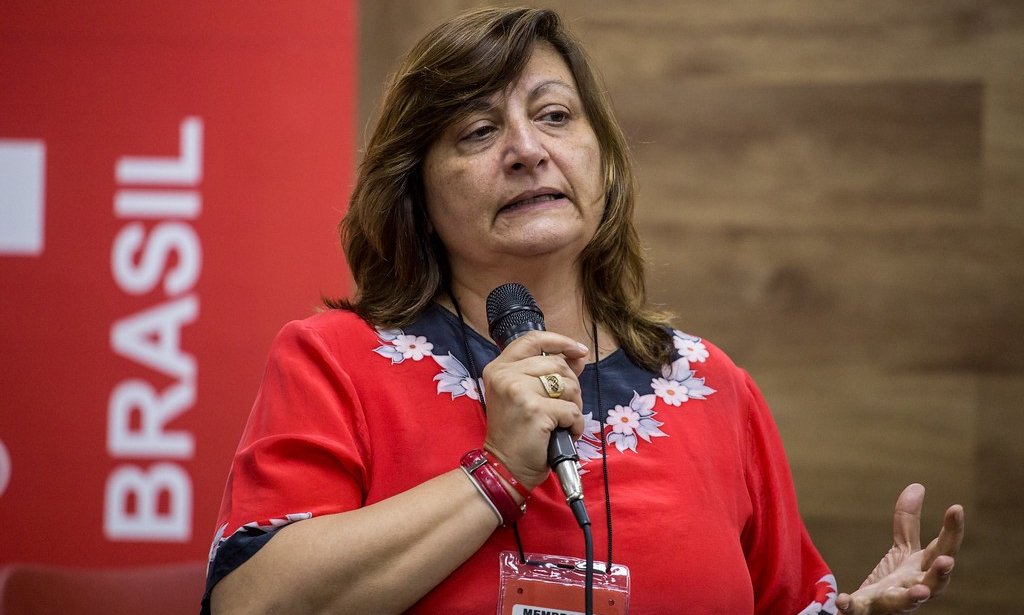 For more than 400 days ex-president remains arrested, after having been convicted in a corruption case stemmed from the Car Wash Operation. From the beginning, the Workers Party (PT) denounces that the real reason for his incarceration is a political-judicial persecution which sought to prevent him from running in the last presidential elections. A line of defense that has been confirmed in the last days by revelations carried out by the website The Intercept Brasil. Hopes of reverting his current condition rebounded a few days ago when the Supreme Court (STF) ruled on an Habeas Corpus presented by his defense. But that did not last, as the court decided for the adjournment of the debate and to keep the ex-president in prison.

On the situation this South American giant goes through, the L´Ombelico del Mondo spoke to Mônica Valente, secretary of Foreign Relations of PT, union leader and ex-vice-president of the Workers Central (CUT). “I firmly believe that in August we will be able to release Lula”, said Valente, analysing that “The fight is for Lula and the democracy”.

Were there hopes in PT of a favorable decision in the Supreme Court for Lula?
Yes, because ever since this judicial inquiry against Lula we have been saying to the world this is a political persecution. Four weeks ago our opinion was confirmed by the revelations of the The Intercept. It´s increasingly clear that ex-judge Moro played a role in condemning Lula and removing him from the presidential race, and had it not been this way Lula would have been elected president.

We had hopes because facts published by The Intercept confirm the juridical thesis of Lula´s defense in an indisputable manner. In spite of judge Celso de Mello having not voted for the immediate release of Lula, he did not get into the merit of the theme shown by his defenders, which is the fact that ex-judge Moro could not have ruled on the charges against Lula because he was part of the prosecution team. Judge Mello only spoke about the immediate release of Lula without getting into the merits of the real matter. I believe that in August we will be able to free Lula, since everything we said is confirmed by the revelations of The Intercept.

Despite this unfavorable ruling, do you believe Lula could leave prison temporarily from September, due to the semi-open regime?
Since the Supreme Court decreased the sentence of Lula in April, he, naturally, can progress to the semi-open regime. This is certain because it is the law. And because from the 12 years of conviction, the Supreme Court decreased it to a little less than 8 years and, in about a year and a few months that he will have served in September, he will have the right to go from one regime to another that wil allow him to leave, work, receive guests and speak to them. The only condition would be to remain at home at night.

We want more than that because we know that Lula is innocent and now it is clear that his conviction was a persecution. We will follow through fighting for the annulment of his conviction because it was not a normal trial. Moro, in his condemnatory sentence, cannot identify any act of corruption that Lula would have carried out in order to be condemned.

The judge speaks of “undetermined acts”. In no part of the democratic world, in no democratic society is someone condemned for “undetermined acts”. That does not exist in democracies or in fair legal systems. We have the hope to annul the condemnation of Lula but, regardless of that, Lula´s defense will request the change of incarceration regime in December, because this is a right he has, like many others, granted by law. What matters to us is the annulment of the lawsuits because it is ever more clear that there is no crime and Lula is innocent. This is a fight for the long haul, we know it, but we will not give up.

Some days ago we spoke to Renato Simões and he told us that the Judiciary did not act in isolation, and other sectors were involved in his condemnation. Do you agree? Of what sectors are we talking about?
Our colleague Renato Simões is right. It is not only the 13th District Court of Curitiba, which ex-judge Moro headed, who perpetrated this underplot against Lula. There are some ramifications in the TRF4 (Regional Federal Court number 4), so much so that Lula´s sentence was ratified by the TRF4, whose president is the godfather of Moro´s son.

At the TRF4 there is also a ramification of the Brazilian juridical apparatus to ratify the sentence of the lower court, which meant a condemnation in the appellate court that, through a maneuvering from part of the juridical apparatus, pressure from the military, resulted in an immediate incarceration, when in 2017 we were unable to postpone the prison of Lula in the Supreme Court. Since the Brazilian Constitution says that there can only be prision after all appeals have been ruled. And Lula, like many others, did not reach the end of process. Therefore there still are other judicial appeals.

Moreover, when it was requested for Lula not to be arrested in 2017, there was a process in the Supreme Court. And the absurd of an Army General, Eduardo Villas Bôas, a sponsor of Bolsonaro´s candidacy, to have made declarations saying if Lula won this appeal in court we would be feeding social unrest. A clear pressure on the court. In this process, one of the eleven judges, Rosa Maria Weber, voted against her own opinion, reported several times in other processes, so as not to allow Lula to wait for his final condemnation in freedom. A judge who has always voted in processes in a law-abiding manner and, in this specific case, before the declaration of the General, said she would vote alongside other magistrates of the Court, even though she thought otherwise. Besides some ramifications of the judicial apparatus, there is also influence stemming from some militaries. This process is complex and is the one that points to the existence of an expressive part of the Brazilian institutional apparatus that behaves in an antidemocratic manner, and our democracy is young. We were unable to achieve the same that was done in Argentina, which was to have set the record straight with the military dictatorship. Certainly those are nefarious legacies we have carried since that time. We were unable to construct democratic institutions that are strong and immune to this sort of pressure, but such is the fight. We carry on fighting not only for Lula´s freedom, which is very important, but also to strengthen the Brazilian democracy, which is currently under threat. If the incarceration of a man such as Lula was possible, one who was president, without a single evidence of his crimes, what is at stake for those without this visibility? The fight is for Lula and democracy.

Is there any strategy from PT (the Workers Party) to extend this demand on a judicial level beyond the Brazilian borders in order to seek a solution in regards to this process against Lula?
The U.N. Committee on Human Rights pursues Lula´s process. It is the same that had recommended Brazil to allow the register of Lula as a candidate, which Brazilian institutions did not comply. At that point, it was a preliminary decision to safeguard the human right of Lula to register as a candidate. Now, the same Committee follows through ruling the case. There was expectation from us for the committee to resume the case in May, but as the government changed and Bolsonaro included further information, the committee postponed the ruling to September. After the revelations of The Intercept, Lula´s defense overseas presented new facts that corroborate the thesis of judicial persecution. We follow through expecting the committee to analyse them without delay. We know that international judicial processes are slower because more care and precision is demanded, but we remain hopeful. If we manage to have a favorable sentence to Lula through the Committee, it will be the first time the country will be condemned for violating the civil and human rights of people.

Besides that, there are many international initiatives. The Nobel Peace Prize of Argentina, Adolfo Pérez Esquivel, on his own initiative presented the candidacy of Lulas Nobel Peace Prize 2019. That was very important. Not only in recognizing the innocence of Lula, but also for his work for human rights in Brazil and the world, such as the combat against poverty and the construction of peace in Brazil and Latin America. This proposal was able to gather much support all over the world, with over 600 thousand people and personalities signing this nomination, which also helps us for being an international recognition.

What is you view, as person in charge of the international relations for the PT (Workers Party), of the imprisonment of a Brazilian military in Sevilla, as part of the official delegation heading to the G20 in Osaka, for transporting 39kg of cocaine? How do you analyse Bolsonaro´s foreign policy?
Since Bolsonaro was elected, it seems that, for his positions, speeches and initiatives, there is a sort of “licence” to offend and to kill, as is the project of arming the population. That explains the absurdity of a military of the presidency team being able to transport 39kg of cocaine on the presidential airplane. It is the guarantee of impunity, the certainty that he is not going to be condemned. It´s a shame for our country. It is not the first embarrassment we are going through since this president took office. It saddens us too much that our country, after glorious years, has to go through this sort of shame, this authoritarian government.

Bolsonaro said that his government will be an administration that will once again follow the United States. This is too great a setback. All his foreign policy takes this course: destroy the Brazilian participation in the construction of multilateral organs and criticize the proud foreign policy we had in previous years. It is a pity that the population needs to stand that and the loss of leadership that means the government Bolsonaro.

Dilma Rousseff: “It is really hard to see an innocent person in jail. I ask myself how our country has come to this”